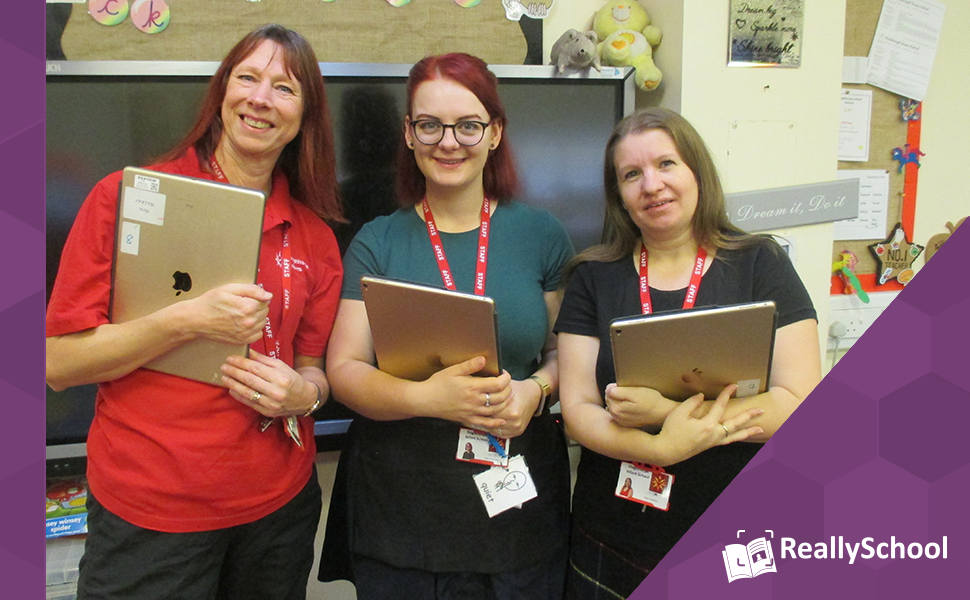 Last week, I interviewed the wonderful EYFS team at Dogsthorpe Infant School. We have been very lucky to have worked with Dogsthorpe, with their feedback being key in helping ReallySchool make improvements during development. In this interview, we discussed the team’s experience with ReallySchool up until now. They have also included some useful tips for new users.

First, please tell us a little about you.

When did you first start using ReallySchool and why?

We started using it properly in January because we needed a new system to monitor progress of children and the ReallySchool team asked for our input to help improve the product, during its development.

Tell us a bit about how you use it in the classroom.

To capture, store and assess children’s learning and progress. We use it for photo and speaking evidence and identifying children’s prior skills and learning gaps.

The simplicity of it and being able to link to multiple age bands is really helpful. I like being able to see how many observations at a quick glance each child has got so then I know which children I need to cover gaps for.

I like the fact that you can link several children and assessments at a time. I like that I can prepare my assessments and groups before I actually do an observation as that saves me lots of time.

Characteristics of effective learning is included now and it’s really easy to use; that’s really helpful. I also like being able to add observations of children from other classes.

What positive outcomes have you had from using it?

It’s about the quality of the observations rather than the quantity which is really helpful. The product has helped us to do that, as we can link to many areas at once.

I can capture more evidence compared to other tools, so I thought of that as quantity at first but maybe it’s more that I’m spending less time on it, so I can capture more learning. I used to spend hours and hours on the computer typing everything up in full where as now I can just do it there and then. Time management has been much better. Seeing the assessments is a real positive, seeing those gaps and where the next steps are.

How has ReallySchool developed since you started using it?

It’s easier to select what you want to do from the dashboard. We can now easily view the areas children have observations in and the areas they don’t with the highlighted grids. We can capture a bigger variety of evidence now, because we have the audio files and that’s really changed things in a good way. Also having children in alphabetical order by first name, being able to use the app in landscape etc. The little things have made a big difference and saved time.

How does it compare to other solutions you have tried?

It doesn’t crash when we try to use it, it doesn’t tell us that we have done too many observations and it allows us to have quite a few photos on there, instead of just a couple! We can link to lots of age bands which is really helpful.

Do you feel your feedback is valued?

I do, because I feel like the ReallySchool team has done a lot of work. You’ve come in to speak to us – it’s not all over emails or pre-prescribed formats that you’re filling out to give feedback. It’s very personal and that makes me feel like my feedback is really valued.

Would you recommend it to other schools and why?

Yes, it’s quick and easy and doesn’t crash on us. When you’ve done it a few times and you know what buttons you’re clicking on, it’s so quick and easy and that’s it! Also look at school budgets at the minute, the money saved can be spent elsewhere on other things that are needed.

What top tips do you have for ReallySchool users?

Set up your group and assessments before you do them to save so much valuable classroom time. Use it smartly using the audio recording; it’s great for observations and it saves on typing time to hear the children speak. You can explain children with unclear speech or speech impediments or who are really quiet, you don’t get that unless you hear that.

Want to know more about ReallySchool? Check out the demo on our home page to explore some of our features or fill out our get in touch form with your query.